A few weeks back, Nigerian singer Fave SZN jetted into the country for a couple of musical performances.

Chidozie GodsFavour, aka Fave SZN, performed at the Shonale club edition at Club Guvnor, and Stress Clinic at Levels.

However, the singer did not perform to the satisfaction of a few Ugandans during the Stress Clinic live performance at Levels.

Upon songbird Carol Nantongo crossing paths with a clip of Fave SZN’s live performance shared on NBS TV socials, she was dismayed. 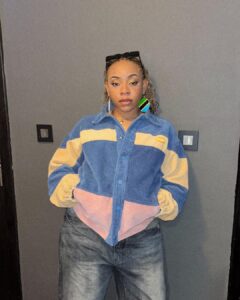 READ ALSO: Eddy Yawe And Nantongo Perform Together Again After A Year Of Crossed Wires

Though the caption on the clip heaped praise on the singer’s performance, Carol Nantongo believed the contrary.

Taking to her Snapchat account, Nantongo vented her dissatisfaction with the Fave SZN, urging Lydia Jazmine to jet to Nigeria and provide vocal classes to the latter.

Carol Nantongo and Lydia Jazmine are some of Uganda’s female artists with beautiful vocal mastery and their live performances have always left revelers in awe.

Songstress Rebecca Kukiriza alias Chosen Becky has revealed that she is no longer offended by social media bullies who use her nose as an...

Nince Henry Urges A Pass to Get Out of the Confort...

Don Mc Narrates How He Missed a Flight at Entebbe Airport...