A few days back, comedian Hanington Bugingo posted one of Sheebah’s recent photos taken at the just concluded Janzi Awards. Bugingo was basically appreciating the singer for staying at the top something which has failed many.

“I celebrate you Sheebah because doing what you have been doing for this long and staying at the TOP ain’t easy! BIG UP

Among the many comments included; –

Replaying to one bitter comment, Ann Kansiime fired back saying Sheebah is an entertainer and for them the fans are being entertained. 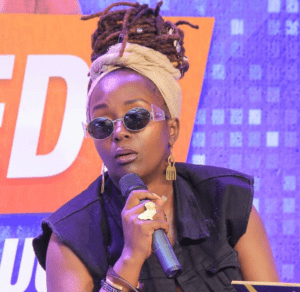 The mother of one went ahead to explain that she can’t dress like Sheebah, because it’s not her cup of tea. She advised the young girls to listen to their mothers owing to the fact that Sheebah won’t rise their kids.

Zari Hassan and Shannitah Namuyimbwa alias Bad Black over the weekend linked up at the just concluded blankets and wine festival at Lugogo Cricket...

Ssenga Justine Nantume Arrests a Teacher Who Beat Her Son to...

Video of Kanungu FM Manager Assaulting a Workmate Over UGX 40,000...

Sheilah Gashumba Cautions Netizens Against People Who Photoshop Her Photos to...

Dream Man, Car & Job: Anita Fabiola is Appreciative of Getting...