The couple’s breakup comes a few months after revitalizing their relationship that saw Sherry Tattoo Katumba’s name on her body. 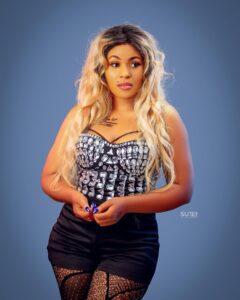 READ ALSO: “Our Breakup Was A Lesson To Us” Daxx Kartel Breaks The Silence

However much Sherry Matovu promised to love Katumba and pledged not to repeat the blunders that caused their split last year, this did not stop her from terminating the relationship for reasons yet to be brought to light.

Taking to her Snapchat, Sherry revealed that she tried her best to see that her relationship with Katumba worked, but all was in vain.

It was at this point that she opted to exit the affair and scrape off the baby daddy’s tattoos, to put away some of the memories. 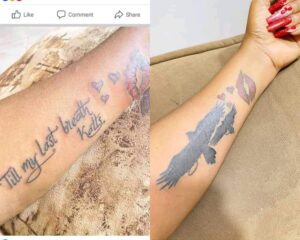 Among other tattoos the socialite got rid of, was “Till My Last Breath Katts” that was situated on her arm, covering it with a flying black eagle.

Exclusive Adminhttp://www.exclusive.co.ug
Providing You with the latest stories dominating Uganda and East African in the Entertainment and gossip industry.
Previous article
Mama Fiina Advises Ladies To Bewitch Their Men To Live In Harmony In Their Marriages
Next article
Canary Mugume’s 600k Kameeza Money Sets The Internet Ablaze

Raymond Bindeeba Emerges from His Slumber State, Remarks on Break Up with Precious Remmie

Precious Remmie's husband Raymond Bindeeba has quashed breakup rumors with actress and TV presenter Precious Remmie. Since the start of this week, rumors have been...

One of Rema Namakula's clients accuses her of portraying bad manners during a wedding gig. On 10th December 2022, Rema Namakula was hired to perform...

Ssenga Justine Nantume Arrests a Teacher Who Beat Her Son to...

Video of Kanungu FM Manager Assaulting a Workmate Over UGX 40,000...

Sheilah Gashumba Cautions Netizens Against People Who Photoshop Her Photos to...

Dream Man, Car & Job: Anita Fabiola is Appreciative of Getting...